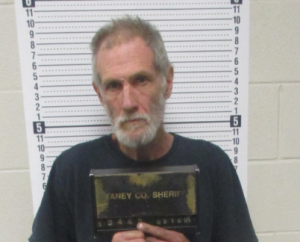 Taney County Prosecuting Attorney Jeffrey M. Merrell announced today that James Leslie Keeler d/o/b 7-13-1966 of Ridgedale, Missouri plead guilty without a plea agreement today to the class D felony unlawful possession of a firearm by a felon as a prior and persistent felony offender. He was set to begin a bench trial this morning in front of Taney County Circuit Judge Tony Williams. Formal sentencing is set for October 2, 2018 at 9:00am.

On February 15, 2018 during a traffic stop in the City of Hollister, JAMES KEELER was arrested and during a search of his person officers discovered .22 ammo in his pocket. During a search of his vehicle, officers found a .22 Browning “Buck Mark” pistol hiding in a coat in the back seat along with a loaded magazine in the pocket. JAMES KEELER is a convicted felon with previous convictions for felony assault and felony possession of ephedrine with the intent to manufacture methamphetamine.

HOKE SENTENCED TO FIVE (5) YEARS ON PLEA TO DOMESTIC ASSAULT