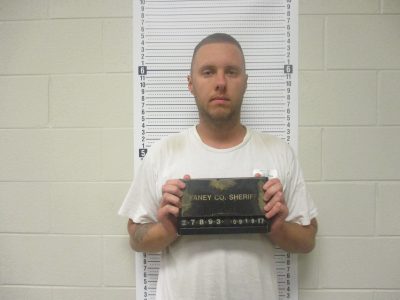 On Thursday, February 22, 2018, KYLE LEE SMITH, d/o/b 10-27-1987, of Branson, pleaded guilty to two (2) counts of statutory rape in the second degree, in the Circuit Court of Taney County, Missouri. Smith appeared in custody before Associate Circuit Court Judge Eric Eighmy and admitted to having sexual intercourse in the summer of 2015 with two (2) underage girls on separate occasions. Judge Eighmy accepted Smith’s guilty pleas, ordered a sentencing assessment report be conducted, and scheduled sentencing for May 3, 2018.

The victims disclosed that in the summer of 2015 Smith engaged in sexual intercourse with them at his home in Branson – and each girl disclosed separate incidents. Smith was interviewed by an investigator and denied the allegations. DNA was discovered on an item of clothing belonging to one victim through the course of the investigation, and was found by criminalists at the Missouri State Highway Patrol Crime Lab to be semen – consistent with the DNA profile of Kyle Lee Smith.

“This guilty plea is the result of the cooperative effort of multiple law enforcement agencies, across multiple jurisdictions,” says Jeff Merrell, Taney County Prosecuting Attorney. “The success of this prosecution is a testament to the selfless, team approach I get to see from law enforcement officers day-in and day-out in this job.”

Statutory rape in the second degree committed in 2015 was a class C felony, so each count Smith pleaded guilty to carries a maximum sentence of seven (7) years in the Missouri Department of Corrections and a $5,000.00 fine. Pursuant to a plea agreement with the Taney County Prosecutor’s Office, Smith’s sentence is capped at five (5) years in prison, and the Prosecutor’s Office will argue for Smith’s sentence to run consecutively to a fifteen (15) year federal sentence Smith is currently serving. Smith is a former teacher at an Arkansas high school.