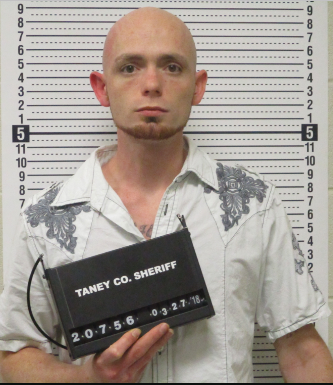 Taney County Prosecuting Attorney Jeffrey M. Merrell announced today that THOMAS BURRUS, d/o/b 12-01-1990 of Powersite, Missouri plead guilty without an agreement to the class D felony of failing to comply with the requirements of a registered sex offender as a prior and persistent felony offender.

On September 13, 2017 a vehicle being driven by THOMAS BURRUS was stopped for expired registration on State Hwy 76 and Aqua Road. During the traffic stop it was learned that THOMAS BURRUS had a suspended driver’s license as well as a prior conviction for felony sexual assault and was currently non-compliant in his registration requirements. During their investigation, the Taney County Sheriff’s Department learned that THOMAS BURRUS was no longer residing at the residence he previously reported to law enforcement in violation of the State of Missouri sex offender registration requirements. Missouri law requires that any change in name or residence be provided to the chief law enforcement officer of the County, normally the Sheriff, within three business days.

Formal sentencing is set for June 27th, 2018 at 1:00pm in front of Taney County Judge Eric Eighmy. As a prior and persistent felony offender, THOMAS BURRUS faces a range of punishment of three to ten years in the Department of Corrections, or up to one year in the Taney County Jail and/or a fine not to exceed ten-thousand dollars (10,000), or by both imprisonment and a fine. As a part of the plea THOMAS BURRUS also plead without an agreement to the class D misdemeanor of driving while license suspended.